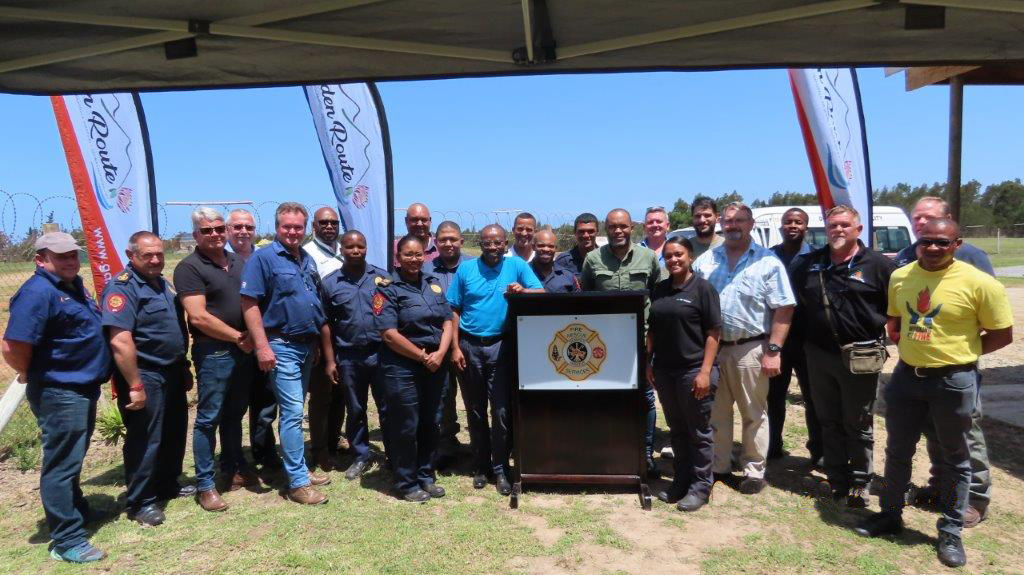 Media Release: GRDM is gearing up for the SUMMER SEASON!

The Executive Mayor of GRDM, Alderman Memory Booysen delivered the keynote address during which he emphasised the need for stronger collaboration and integration between the different stakeholders. “This will ensure better preparedness for the task at hand, as we deal with fires in a preventative rather than a punitive manner,” he said.

In his remarks, Mayor Booysen acknowledged the role played by the different stakeholders and noted the fact that there is no longer a beginning or end to the annual ‘fire seasons,’ especially in light of climate change.  He referred to the fuel loads in the region as a massive risk and called upon all governmental stakeholders to work better together. “Our discussions must shift to preparedness.  District Mayors need to address the fuel loads on all their various platforms.  It is imperative that fires are detected early, and we ought to use the technology available, such as cameras and satellites, to assist in the response and preparation,” he said.

In conclusion, Alderman Booysen mentioned that the work of the firefighting fraternity is not unnoticed, and the challenges they faced are well known to the district’s mayors. He praised the Working on Fire Program and pointed out how these firefighters walk, on the N2 and in the mountains, as a sign of their care and devotion.

Frank Smook, of WoF/Kishugu Aviation, spoke about coordinated operations and noted that Denneoord Airbase will be home to two Command & Control planes, two AT802 Bomber planes, and a helicopter. The importance of having all agencies working and pulling together was stressed by him. Also the importance of having fire apparatus and aerial resources ready at all times, as well as knowing your region’s fire danger index on any given day. Smook explained the significance of activating an aerial firefighting response, such as an initial attack, as soon as smoke is detected in high-risk areas, in order to suppress a fire quickly and efficiently. Lastly, he said good communication is essential, particularly WhatsApp groups, which assist in coordination and can be utilised for communication amongst agencies. The Southern Cape Fire Protection Association’s Dirk Smit explained the importance of having sound systems in place, alluded to efforts to improve Integrated Fire Management, creating platforms to address the real issues and reinforcing partnerships in our region to make a difference.  He also pointed out that firefighters’ safety is very important and that this aspect must be a priority to ensure that they can perform the tasks at hand. He wished everyone a safe season.

In conclusion Deon Stoffels, GRDM Chief Fire Officer started his address as follows: “First and foremost, we are here to protect people and property, but it is equally vital to protect the environment, which provides a wealth of natural resources essential to the economy of the region, and that collaboration is imperative between stakeholders in fire management. Whilst protecting the urban areas, it is also equally important to protect the rural areas, including farmers and farm workers, crops, vineyards and infrastructure,” he said.

The Summer Season Operational Plan, inclusive of all stakeholder’s resource availability are in place and ready to be activated for each respective jurisdictional area when and if the need arises.

A special recognition was given to the Provincial Disaster Management Centre for the ‘PDMC First Hour’. This is available to the District for a period of 01 December 2022 to 31 March 2023 to ensure rapid aerial firefighting resources could be activated upon vegetation or mountain fire detection.

Fire Safety & Prevention is everyone’s responsibility and the public is urged to apply caution in their own individual spaces. It is however vitally important to alert the Fire Brigade Services immediately upon detecting any form of fire breakout.