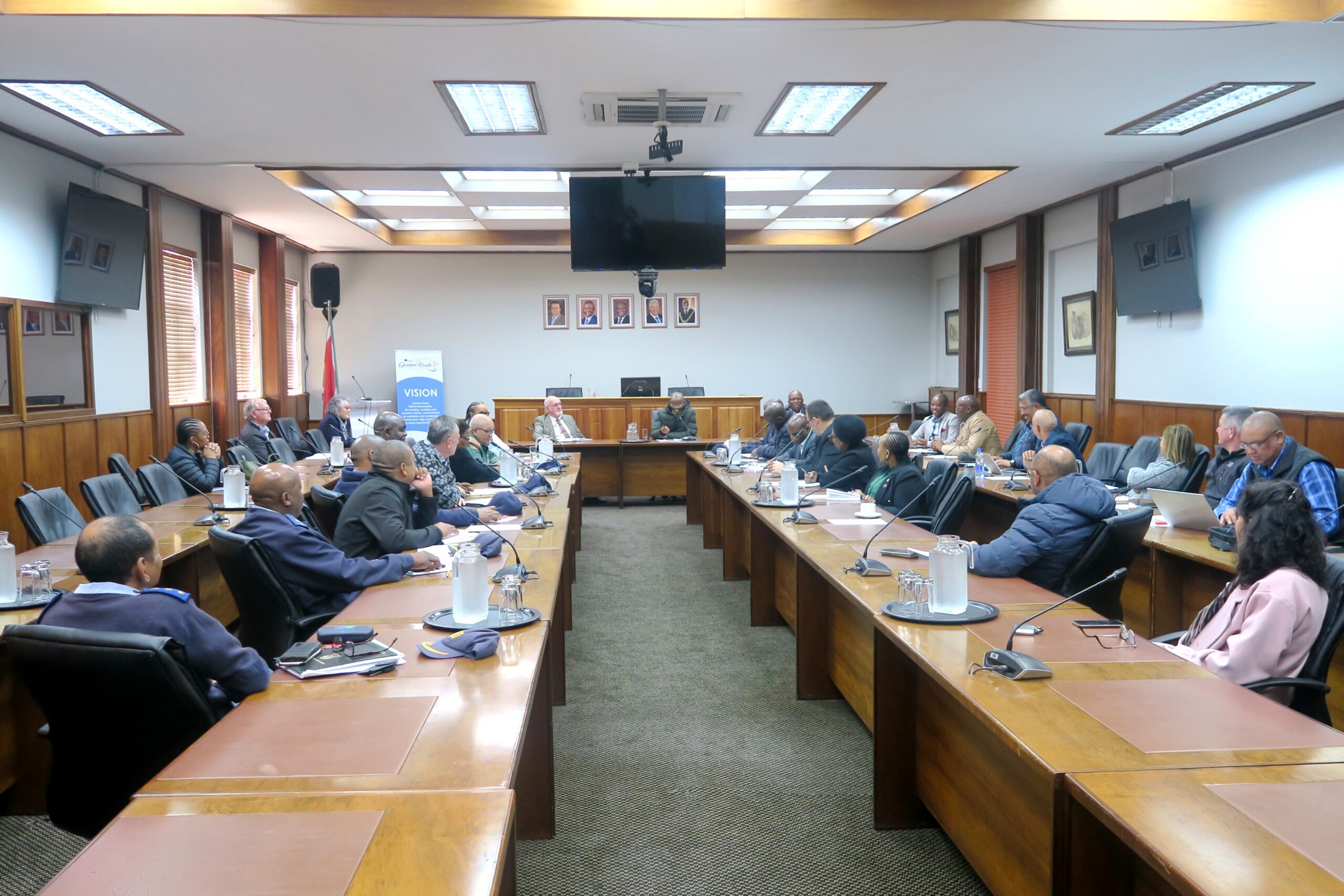 On Wednesday, 03 August 2022, the Garden Route District Commissioner, Major-General Norman Modishana and his management had a meet-and-greet session with the Executive Mayor of Garden Route District Municipality (GRDM), Ald. Memory Booysen, his Mayoral Committee, Municipal Manager, Monde Stratu, as well the Senior Management of GRDM. The Provincial Commander of the Hawks, Major-General Mathipa Makgato and his delegation including Brigadier Mushavhaduvha Ramovha accompanied the District Commissioner and both unpacked their mandate and plans to fight/prevent and investigate crime.

While addressing the delegation, Municipal Manager of GRDM, Monde Stratu extended a warm welcome to Major-General Modishana to the area and said that the GRDM will support SAPS to prevent and combat crime in the area. He said: “Whenever it is necessary, we will also avail the resources of GRDM to SAPS, including the Disaster Management Centre which is one of the best Disaster Management Centres in the Western Cape Province to assists SAPS in fighting crimes”. He also mentioned a few concerns daily experienced in communities. One being the issue of the operating of liquor outlets in the area and he specifically mentioned about the by-laws in relation to the operation and access times of liquor outlets, including access to liquor by the youth. Adding to these Stratu emphasised that these are some of the major issues that is continuously raised by communities.

In return, Major-General Modishana, who was appointed on 1 June 2022, gave a brief resume of his career and expressed his desire to maintain and improve partnership policing with the GRDM. “Policing is multi-disciplinary approach which everyone has to bring their part to ensure that everything is taking place in the interest of the organisation,” he said. He further admitted that the district has challenges and said: “I hope that as we will be dealing with those challenges, that we will manage them. Adding to this he said: “We must not lose sight and continue to go forward, because when the community looks at us as government structures, we want them to have confidence in us, so that they feel free and safe at the same time”. The issue of the country-wide pandemic, gender-based violence (GBV), was also discussed and the various forms of crimes that relate to it, such as rapes, assaults, murders to name a few. “As a district, we are taking GBV seriously and it will be dealt with to a level where it can be managed and minimised. I look forward to working with all our stakeholders of SAPS,” he highlighted.

Major-General Makgato explained the roles and responsibilities aligned with the Directorate for Priority Crime Investigation (DPCI), also known as the Hawks, as enshrined in legislation. He mentioned that their role is two-fold; not only to investigate but also to educate. He urged the Municipal Manager and his senior management team to assist and cooperate with the DPCI, whether with investigation or awareness campaigns that will be rolled out in the near future. “There are certain expectations from the community and from government at large and our mandate is to investigate the national priority offences which deal with serious investigations, including corruption, commercial and organised crime investigations.” He further said that “we have all those competencies that have been established, although we are still doing our best to capacitate them.

Makgato also said that one of the responsibilities of DPCI, is not only to arrest, but also to educate. “By educating through awareness campaigns, we should be able to sensitise our people, because some will do it knowingly and some will say ‘we did not know’”. With regards to the support needed from stakeholders such as GRDM to roll out programmes, Makgato said: “We want the buy-in from the District Municipality, so when we begin with awareness campaigns, we would need your assistance”.  To Mayor Booysen he said: “I am grateful for the opportunity that you have provided to us and that you commit yourself to serve the people of the District without any favour, I am appealing to my office that is here, reach out and cooperate”.

Mayor Booysen thanked Major-General Modishana and Major-General Makgato and the SAPS delegation for their visit to the GRDM offices. He also extended a warm welcome to the District Commissioner after being appointed to serve the Garden Route. Mayor Booysen emphasised that communities, many times, do not understand the difference between SAPS and the Judiciary and the link between the two departments, but we appreciate the idea of the awareness campaigns planned for the area and as GRDM we would greatly assist. We are looking forward to strengthen the relationships with our stakeholders going forward,” he concluded.

Executive Deputy Mayor, Ald Gert van Niekerk thanked the delegation for their visit to the GRDM offices. He said: “Fighting crime was a function of SAPS for ages, but as a district municipality, we will assist. We need each other to serve our community, but preventing and the combatting of crime is none other than good service delivery; so let us maintain this course, let us keep our door open and let us do it”.

Representatives from Garden Route District Municipality, the Hawks and SAPS during the meet-and-greet session.