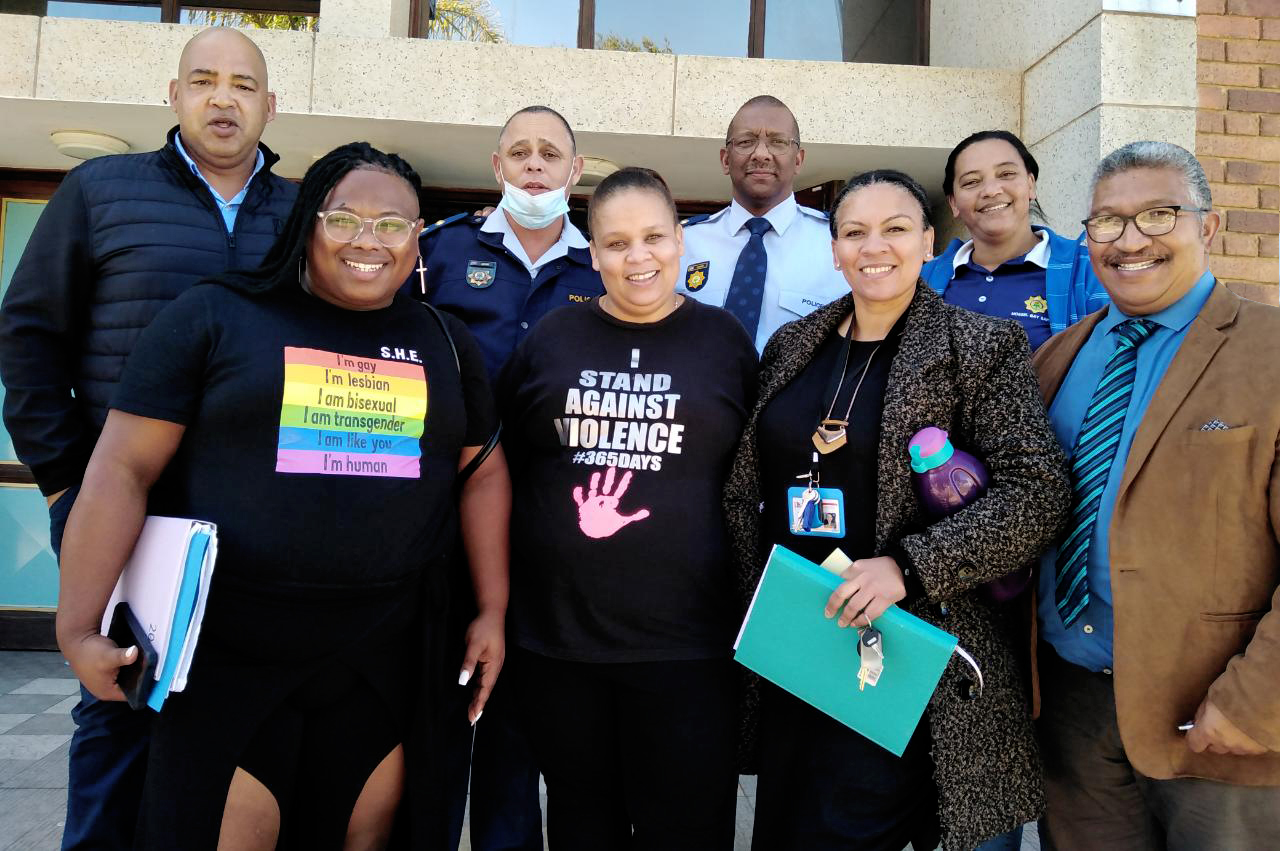 The annual Gender-Based Violence (GBV) Prevention and Awareness Summit, hosted by the Garden Route District Municipality (GRDM) in collaboration with the South African Police Service (SAPS), Eden and Da Gamaskop Cluster, took place on Thursday, 29 April 2022 at the Pacaltsdorp Civic Centre in George. Attendees included stakeholders and community activists involved in GBV from all over the district. During this year’s summit, GBV issues and challenges in the Garden Route were discussed, with the intention to develop a GBV action plan as part of the National Strategic Plan. Messages of support and presentations were delivered by the National Youth Development Agency, Garden Route Men’s Sector, Family and Marriage Society of South Africa (FAMSA), Western Cape Department of Social Development, -Justice, -Correctional Service, -Health, as well as the local LGBTQIA+ community, faith-based and NGO communities in the district.

The summit also aims to bring together people from different communities, to talk openly about issues that occur in society; to prevent people from working in silos; to share ideas and come up with solutions. All these aims are combined to create a comprehensive plan to bring HOPE to people who are hopeless and fragile. A remarkable highlight of the summit was when Fredeline Stellenberg, a victim and survivor of GBV who was brutally attacked and stabbed 23 times in 2014, delivered her testimony. With her opening remarks, she said she didn’t want to focus on the actual event too much. Instead, she rather wanted to focus on how to rise and continue after such an experience.  “No one can change the person they love or make them a better version of themselves. Unfortunately, a person will only change if he/she wants to. The biggest lie we, as women, can tell ourselves is that we have the ability to change our husbands.”

Fredeline further explained that she did everything she could to get help, hoping that things would change for the sake of her children. But towards the end, she realised that she was doing more harm to everyone she was involved with, including her husband. “I was never ashamed to show people that my marriage had cracks; I reached out for help, but in the end almost lost my life. I’m appealing to women, as well as men who suffer in silence, to stop pretending that everything is ‘fine’ but to start speaking out. You deserve better! Faith in God, love for my children, and hope for a better life carried me through. Always remember, nothing in life is so terrible that it cannot be overcome,” she says. Ms Ingrid Parks of the Western Cape Department of Social Services applauded the community and Community Safety Forums (CSF) for being the ‘coalface’ in their communities who acts as an arrow of referral.  She thanked the CSF members for the time that they offer and the work they do. Parks proceeds by saying, “It is at events such as today, when representatives from all departments gather together, that everyone is reminded that they all have their starting and ending points. When it comes to gender-based care, the bottom line is that departments must work cross-sectorally, meaning that the one hand must hold the other hand,” Parks said.

According to Ms Parks, Social Services offer a response and early intervention services. It is the first priority to assess and contain clients that are referred by SAPS, departments, and NGOs. This is because people/victims who are broken come with a lot of tears and brokenness and need comfort and containment.  She elaborated on the critical support services they provide to families and individuals, which include:

When it comes to raising awareness, we realised we had to move away from the 16 Day of Activism program to a 365 days campaign. Programmes need to run all year round.  “We have to go back to the era where we take back our streets, right where we stay, because we have a role to play in our homes, churches and community.”  In conclusion, Ms Hendricks, also from the Department of Social Services spoke on their victim empowerment programmes, the different residential and non-residential services offered and the care and protection of victim programme, which includes the placement of victims in temporary safe house facilities.

STATISTICS SHARED BY THE DEPARTMENT OF HEALTH The ±200 people in the audience were captivated by the shocking statistics and data shared by the Department of Health.  As part of the department’s GBV programme for 2021, Hessequa and Oudtshoorn were flagged as the two towns in the Garden Route where more than 17% of babies born, were born to women between the ages of 10 and 19 years old.  This means that those women did not have the opportunity to complete their schooling or get to the next level of education. Furthermore, 51 girls between the ages of 10 -14 gave birth in 2021 in the Garden Route district and some of them were survivors of rape.

Mrs Gail Holton stressed the rise of sexual assault cases for 2021, saying that it’s evident that the system put in place by the department is working and that people are confident in getting the help they required.  In conclusion, she highlighted the interventions the Department of Health had decided to undertake now around GBV in an attempt to look at their own ‘house’ first, trying to ‘fix’ it.

Among the steps they will take are:

It is the department’s belief that if they have an informed staff and get their house in order, they will improve the patient experience.

A MESSAGE FROM AN LGBTQIA+ ACTIVIST ‘Lady Jojo’, an activist in the local LGBTQ+ community in the Garden Route, explained where LGBTQ+ fits in at gender-based violence and shared some of the challenges faced.  She referred to her past experiences, amongst others of GBV, “I am a product of being abused behind four walls, closed doors and closed curtains.  After that, I am expected to go out and act normal, because I’m called a ‘moffie’tjie’ by some.

She also took time to explain the different letters of the LGBTQIA+ initialism, which stands for Lesbian, Gay, Bisexual, Transgender, Queer, Intersex and Asexual, with the + sign including allies and other initials like pansexual, transsexual, questioning, etc.

Lady Jojo shared a deeper understanding on the names LGBTQ+ are given as swear words, as a means to take away their dignity, to make them feel inferior and rob them of their femininity.  She also left the audience with some food for thought, challenging them to think deeply about the following:

“Please note, we as the LGBTQ+ community will no longer ask society to respect us, we will demand that from you.  We do not ask you to accept us, we ask you to tolerate us, just like we all have to tolerate others”.

RESTORING DIGNITY WHEN DEALING WITH VICTIMS OF GBV Ms Angelique Vezasie from the Thutuzela Care Centre situated at the Casualty Unit of George Hospital explained her organisations role as a multi-disciplinary team connected to the National Prosecuting Authority (NPA), health professionals, and the South African Police Service (SAPS). She also said that it is a one-stop facility introduced as a critical aspect of reducing secondary victimisation and improving conviction rates.

She briefly summarized the processes followed when a victim has been raped or sexually assaulted and reported it to the police. “When dealing with victims, it is very imperative that they receive the best quality service while maintaining their dignity, regardless of their age or the condition they are in when they enter our centre.  GBV victims need to feel that they will be helped, seen, heard, respected, and believed when they come forward,” Vezasie said.

THE BILL OF RIGHTS, CHAPTER 2

Ms Elise du Toit, from the Department of Justice and Constitutional Development in Pretoria, presented next via Microsoft Teams. She spoke about the importance of understanding human rights and applying them.  Attendees were urged to regularly read the Constitution that was provided to them, to understand the rights and duties of everyone living in South Africa and to become familiar with the defined structure of government and the values embedded within it.

For the purposes of the summit, Du Toit mainly focused on Chapter 2 of the Constitution, the Bill of Rights.  “The Bill of Rights is the cornerstone of our democracy, and if you don’t want to read the Constitution or aren’t interested in anything about it, then I encourage you to read Chapter 2. It affirms our values of human dignity, equality, and freedom and explains our rights as citizens. However, most importantly, the state, not only the citizens or the public servants, but the government as a whole, has to maintain, promote and protect these rights,” explained du Toit. As the founder and managing director of God Cares International, Debbie Pijoos has a reputation for being a passionate advocate for GBV in the Garden Route region. In her address, Ms Pijoos told the audience about a world-first new app she and her team developed to help victims of abuse and GBV.

Pijoos gave a brief history about how the idea of the app came to light from a desperate desire to do something about the escalating numbers of GBV in communities.  “It was a very difficult year for GBV in our country in 2019, and as you all know, GBV does not have specific criteria.  That year I found myself with the question, is there anything we can do to assist with this crisis, but at that stage, nothing came to heart.“

Months later, Pijoos and her team came up with the idea to develop a user-friendly app to assist not only victims and their families, but also offenders and those who would like to help and fight the war against GBV.

During her concluding remarks, Ms Pijoos explained the different support and services the app provides. She said: “Yes, we are sitting with a fatherless generation and that’s why we included a panic button on the app.  Why must we always end with fathers or mothers going to jail and their spouses being buried, leaving children behind as orphans?  Why not try and do something to stop this from happening in its tracks.” The last speaker for the day was Ms Charmaine Cronje; a Social Worker at the Department of Correctional Services who gave a brief overview of what happens when a person ends up in prison after being sentenced.  She explained the role of the multi-disciplinary team involvement, consisting of social workers, psychologists, teachers and spiritual care workers. Also how these role-players individually assess a prison in order to determine the needs and to recommend programmes.

“I need to clarify that officials in the past used to be only responsible to open and close prisons, but this process completely changed.  Each official currently in service is seen as a rehabilitator, working together to help rehabilitate prisoners.”

Ms Cronje further explained that all the departments and NGOs present form part of their rehabilitation programmes and awareness activations that are regularly been roll-out in prison.  “Rehabilitation is a process. When a prisoner is released, our ideal and goals are for him/her to be fully rehabilitated, ready to take his/her place as a fully capable individual in the community.” Mr Siphiwe Dladla, the Chief of Staff for Garden Route District Municipality, concludes the summit by encouraging the delegates to share the information and knowledge they gained with others.  “It is critical to remember that everyone in the country is affected by this pandemic.  Let’s get involved in the fight against this evil.”  Mr Dladla thanked the audience for their patience during the lengthy programme and presentations.  Specifically, he thanked SAPS, under the leadership of Lieutenant–Colonel  Kennedy, for ensuring that the right speakers were present and that the most relevant topic was covered with a high level of participation.