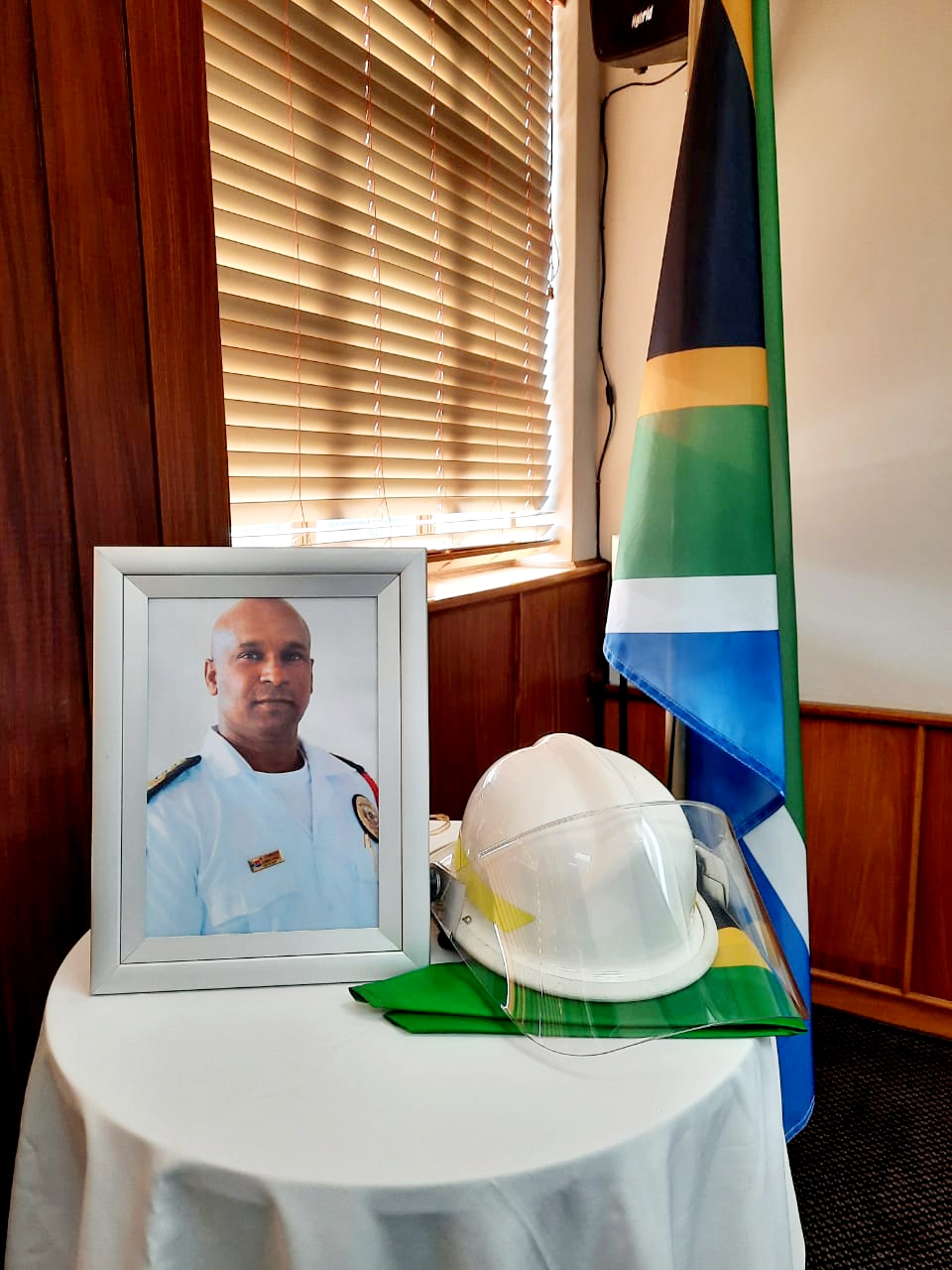 This morning, Council, Management and Staff of Garden Route District Municipality  (GRDM) bid their colleague, the late Fire Chief, Mr Freddy Thaver, farewell during a touching memorial services held by the Municipality at its Council Chambers in George. Mr Thaver passed away in George on Thursday, 1 July 2021 at the age of 53 after experiencing Covid-related complications.

Mr Thaver joined the GRDM on 1 April 2016, to lead the Fire Services Unit as Chief Fire Officer.  He owned diverse characteristics, from being a firm, decisive and strict leader and person, to being a father figure for many and always joyous and full of laughter.

During his eulogy at the event, Executive Mayor of GRDM, Alderman Memory Booysen, referred to Mr Thaver as an expert in his field.  He recalled an incident at one of the wildfires in Hessequa. He explained that the wildfire was of such a nature that it almost burned down the Joint Operating Centre (JOC).  “In a state of panic, farmers arrived at the JOC with ideas to contain the wildfires.  However, Freddy was determined and took a stance that the idea would not work”. He said that it was due to these firm attributes that Freddy was a unique and admirable Fire Chief.

Municipal Manager, Mr Monde Stratu, said that Thaver was no push-over. “He had principles and stood for what he believed in”. He also recalled many experiences with him and fellow firefighters, but up to this far he was not aware of anything that Mr Thaver said behind his back which he did not tell in his face. Adding to this Mr Stratu said: “It was always a marvel to watch him fight his battles. Through this, Mr Stratu highlighted: “He was passionate about his work, very strong-willed and very decisive about his positions”.

Ms Louise Hoek, fiancée of the late Mr Thaver, mentioned that he was a proud family man and that he was passionate about firefighting and saving lives. She also remembered how he fought for those who he dearly loved. “I will never forget the example he set. When I met him the first time, he was clearly presented as a proud man in uniform”. Adding to this, she said: “I never thought that today I would be paying tribute to his life at a memorial service, instead I thought we would have done our wedding vows around now”.  She concluded: “Despite of the heartbreak I am grateful for the opportunity to have met him and that we could be part of the life of this special human being”.

Mr Deon Stoffels, GRDM Station Commander, on behalf of the team members at the various GRDM fire stations, described Mr Thaver not only as a fire chief, but a father to the firefighters, a mentor and motivator.  “He was also a man with great respect for his career and others, disciplined and a person of integrity.  He furthermore had a high level of intellect relating to his profession. He had good interpersonal skills and was a hard-working fire chief, determined, but also funny with a unique sense of humour”. The GRDM Riversdale team remembered Mr Thaver as a highly valued and respected member of the Fire Services Department, as well as GRDM. “The effects of his passing are already felt”. Further to this, they said, “Mr Freddy Thaver was a wonderful Chief who understood the meaning of the word ‘leader’. He was always focused on the good of this Fire Services Unit, rather than of his own benefit”.

Apart from only focusing on managing the firefighting team, Mr Thaver made many contributions to this department. The female firefighters recalled the efforts of Mr Thaver in relation to their needs in the service.  “We could do anything that we put our minds to, because we had our Chief’s full support – we will miss him for all his efforts in ensuring that we live our full potential in our profession”.

The service was directed by Mr Clive Africa, Executive Manager for Community Services, responsible for fire services at GRDM.

We as Council and Staff, most of all the Firefighters, will sorely miss you”.