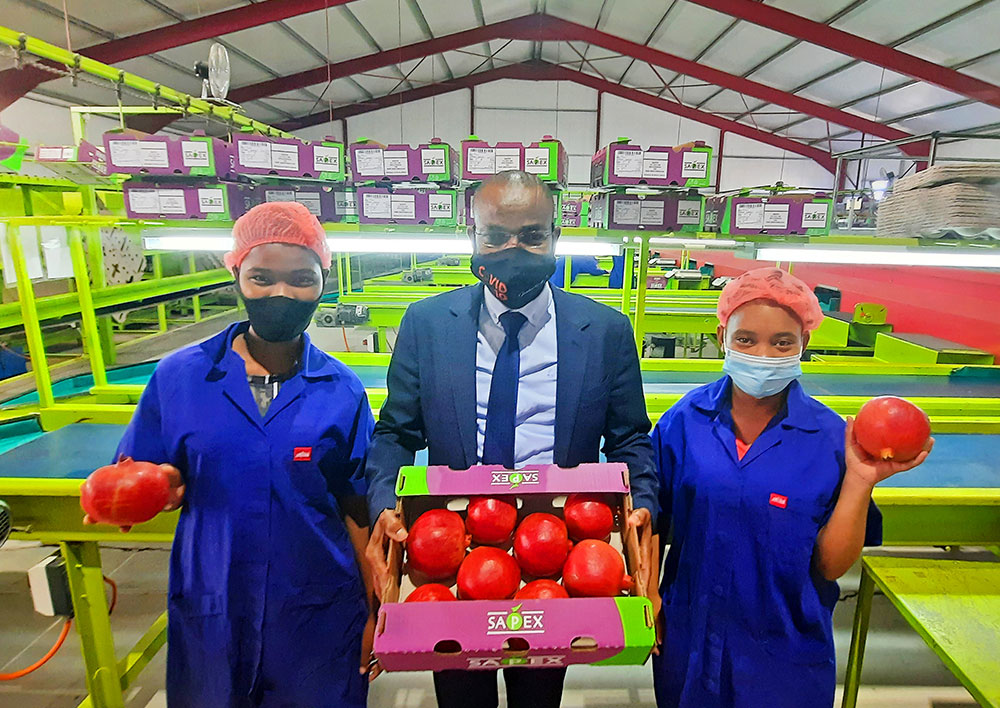 This partnership seeks to develop the Klein Karoo economy, to create a sustainable environment and jobs – some of the important focus areas for the Garden Route District Municipality (GRDM), which wants to form part of efforts to turn around the high unemployment rate of Kannaland communities. A recent partnership came into fruition when the GRDM Council gave the go-ahead for the GRDM Municipal Manager, Monde Stratu, to enter into a Memorandum of Agreement (MoA) on behalf of the GRDM Council with the Calitzdorp Export Agri Hub. This landmark agreement will see that high impact pomegranate farms in the Klein Karoo get off the ground.

The immediate need for the Calitzdorp Export Agri Hub was for a R600 000.00 injection to carry out a water study for the area. This phase, which was eventually funded by GRDM, includes a water study that involves the drilling of boreholes. Subsequently, two desalination plants for reverse osmosis, capable of cleaning 60 000ℓ of water per hour, were donated by the Calitzdorp Export Agri Hub to GRDM. These plants have an original purchase value of R2.5 million.

According to Dirk Rudolph, the contracted Geohydrologist, boreholes are currently being drilled in accordance to a geophysical survey that indicated that the most viable option would be to drill formations north-west of the pomegranate farm. This area includes the Baviaanskloof, Skurweberg, Goudini and Cedarberg formations.

At the moment, each borehole is analysed at regular intervals by using a V-notch weir during drilling. This will help the Geohydrologist to get an estimate of the blow yield of each borehole. According to Rudolph, this will be followed by each borehole being subjected to a 72-hour constant pumping test.

POMEGRANATES IN THE SOUTHERN HEMISPHERE

Research indicates that pomegranates require 6000 m³ water per hectare. This is 2.5 times less than almonds and about 2.8 times less than Lucerne, which makes it this the crop with the highest return per litre of water. Although this type of farming is still quite a young industry in South Africa and the Southern hemisphere, studies indicate that Kannaland and Oudtshoorn offer the best micro-climate for pomegranates in the Southern part of Africa.

The project, coined the ‘Klein Karoo Export Hub’, wants to see the 1% pomegranate export market held by South Africa expanded. According to Monde Stratu, GRDM Municipal Manager: The plan is to meet the demand for pomegranates during off-seasons to other parts of the world and the Klein Karoo Export Hub aims to export at least 50% of all pomegranate from this hub to other parts of the world. The GRDM’s partnership with the Klein Karoo Export Hub was carefully considered, subsequent to available research about pomegranate exports from South Africa. “The demand and supply factors relating to the industry, local soil analysis, climatic and environmental studies are some of the many factors we had to get insights about,” he said.

The GRDM Council supports the drive to promote economic growth through a co-ordinated regional approach and partnership in agriculture and Agro-processing that is focused on employment creation and exporting. “If all goes according to plan, a 1000 hectares (10 million square metres) of land will be acquired, of which 10% will be reserved for ten (10) Black Economic Empowerment (BEE) farmers,” said Alderman Memory Booysen, Executive Mayor for GRDM. “According to our calculations, each of these farmers will receive 1%, or otherwise calculated as 100 000 square meters or 10 rugby fields of land to produce pomegranates and to form part of the pomegranate crop value chain,” he explained. “We therefore fully support the Klein Karoo Export Hub project because we will also be able to create a unique model for rural development in the region that can be duplicated elsewhere. This is also in line with our efforts to implement the Joint District Metro Approach (JDMA).”

The project would see the establishment of an Agri-village, housing approximately 600 farm workers who will own their own properties. “We anticipate that the project will create 1800 permanent jobs and 2000 seasonal jobs, pomegranate orchards and attract Agri Tourism,” said Booysen. Project Klein Karoo Export Hub has already secured 30Ha for the development of the Agri Village.

It is planned to grow Wonderful Pomegranates in the Calitzdorp area. The area is already known for exporting apples, pears, peaches, plums, grapes, and apricots elsewhere. The Klein Karoo Export Hub, known as Celebratio, already has a packhouse for fresh fruit and will also build juicing, oil pressing and process facilities to enhance its business model.

The GRDM Planning Department implements the project through its Project Management Unit. According to PMU Manager, Mr Passmore Dongi, “the idea is to create sustainable rural economies that can withstand the shocks and test of time”. It is imperative that as a District we have a paradigm shift in terms of sustainable development and begin the process of looking at development in a holistic manner. In order to deal with unemployment, poverty and other issues we need to be visionaries and begin to use locally available resources to address local challenges and to capitalise on comparative advantage as it pertains to our region. This project is aimed to bring a new dimension and perspective to the concept of rural development as this is aimed to demonstrate what honest PPPs arrangements can yield – if the engagements are transparent and with the objectives of addressing the needs of society at heart.  This project will create an oasis of wealth in an area deemed to be of no significant value because of the climatic conditions. The project will also have significant green energy projects to power most of the activities in the hub. “We will create a smart clean rural Agri hub that responds to the UN Sustainable development goals,” said Dongi.