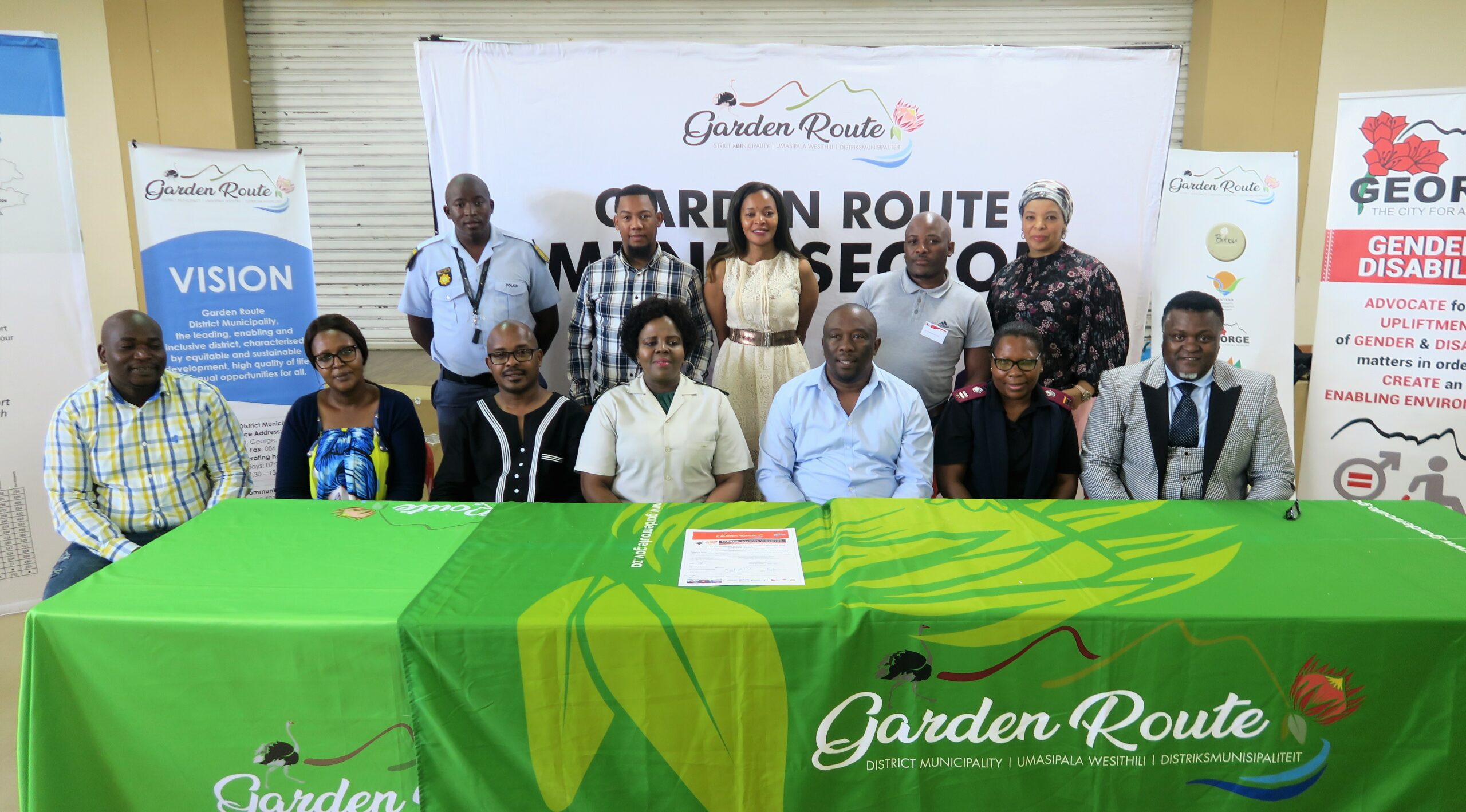 Representatives from Garden Route District Municipality (GRDM) and local municipalities in the district, as well as Sector departments and Civil Society on Wednesday, 23 November 2022, launched a joint campaign to commemorate the 16 Days of Activism Against Gender Based Violence (GBV). Approximately 150 stakeholders and members of the community attended the event.

The objectives of the programme were to encourage the community to speak out on abuse and violence, as well as to promote a safer and more caring society. With various challenges experienced in society, awareness of the negative effects of abuse on women, children, people with disabilities and other vulnerable groups will be created through the programme’s initiatives. The programme ultimately encourages a society that is free of violence and abuse.

The program’s stakeholders continuously create strategic intervention mechanisms to achieve this ideal of a violence-free society. Some of those interventions include:

At the event, stakeholders were furthermore required to mainstream the campaign within other programmes targeting, especially, vulnerable groups. Through these programmes support will be provided to victims of abuse and violence; substance abuse with more focus on youth, will be denounced; and women, men, youth and older people in the discourse will be actively engaged in combating violence at work, at home and in communities. Most importantly, perpetrators of abuse and violence will be challenged to change their behaviours.

In his address, Nkosiyabo Lose, Project Coordinator at GRDM said: “With the national 16 Days of Activism Campaign that will commence on 25th of November, as Garden Route District Municipality, we will endorse all programmes that the local municipalities will roll out in support of the campaign”. Lose further added and said: “It is very sad to see what is happening to our sisters, mothers, and daughters. And, as a district municipality, we want to make sure that one day we will win this battle. We fought against the injustices in the country and therefore we will win this battle of GBV against women and children. Let us soldier on, let us commit and let us make sure that we fight and succeed in the battle against GBV”.

Municipal representatives from Mossel Bay (top, left) George (top, right) and Bitou (bottom, left) provided information on their initiatives in line with the campaign and Councillor of George Municipality and former Portfolio Chairperson of Community Services at GRDM, Cllr Khayalethu Lose (bottom, right), delivered the vote of thanks.

Social Worker at the Department of Correctional, Ms Witness Sefala, during her address, explained their Departments’ Victim Offender-Dialogue program. She explained that the purpose of the programme is to provide a platform for dialogue, for victims to voice their trauma and to restore their dignity. The program is voluntary and “we encourage offenders to take responsibility for their offences as well as admit they have committed the crime”. Added to this she said: “As Correctional Services, we have all the resources and capacity, but with corrections being a societal responsibility, we still need the community to work with us”.

Vuyokazi Gcelushe, Social Worker at Ithemba Lobomi, stated: “All of us need to run this race. It is not an individual fight; it is a fight for us all”. Furthermore, she added, “Let us move away from normalising domestic violence, whether it is violence against a child or violence against a parent. Let’s not keep it to ourselves, let’s be a society that is curious, and stop saying, “It’s not my problem, it’s my neighbor’s”. We are therefore committing ourselves to supporting this programme,” she said.

Stakeholder representatives addressing the audience in support of the 16 Days of Activism Campaign launch.

A Professional Nurse at the Department of Health, Sr Pauline Ewerts, during her message of support, urged all present by saying that “when people talk to you about their issues, listen to them and support them”. Due to her past experiences with GBV, she said, “I also know what it is like to be in that vulnerable position, but because I told my story to somebody, I was helped, I could continue my studies, and today I have a heart for people”. She encouraged stakeholders present to encourage their audiences to speak out and accept help.

Stakeholder representatives and attendance during the candle light ceremony in support of the fight against GBV.

Apostle Jackson Moyikwa from the Word of Faith Church, who handled the candle ceremony and facilitated the signing of the pledge, raised a few issues relating to GBV. He said: “There are many women that are in abusive relationships, and they come to church and look pretty, but they are being abused. However, ‘due to religion, they do not open up,’ he said. “It is time that you open up and talk about the issue”. In addition, Jackson mentioned the issue of the young girls that he often saw in front of taverns in the evening. He asked: “Why are these young girls outside at night, and more so in front of taverns?”

All stakeholders at the event, such as the South African Police Service, the National Prosecuting Agency (Thuthuzela Care Centre situated at the George Hospital), the Department of Education and the Non-Governmental Organisations, as well as the municipalities present also signed the pledge of their support towards the campaign and in the fight against GBV.

Stakeholders signing the pledge against GBV during the event.

The event was closed with Councillor of George Municipality and former Portfolio Chairperson of Community Services at GRDM, Cllr Khayalethu Lose, as he shared words of appreciation to all stakeholders who participated in the program and to all attendees for their time as they listened to these critical issues that relate to this human rights violation, GBV in society.

The programme was coordinated by GRDM’s Nkosiyabo Lose (left) and the event was directed by Doc Skosana, a representative from the Department of Correctional Services (right).