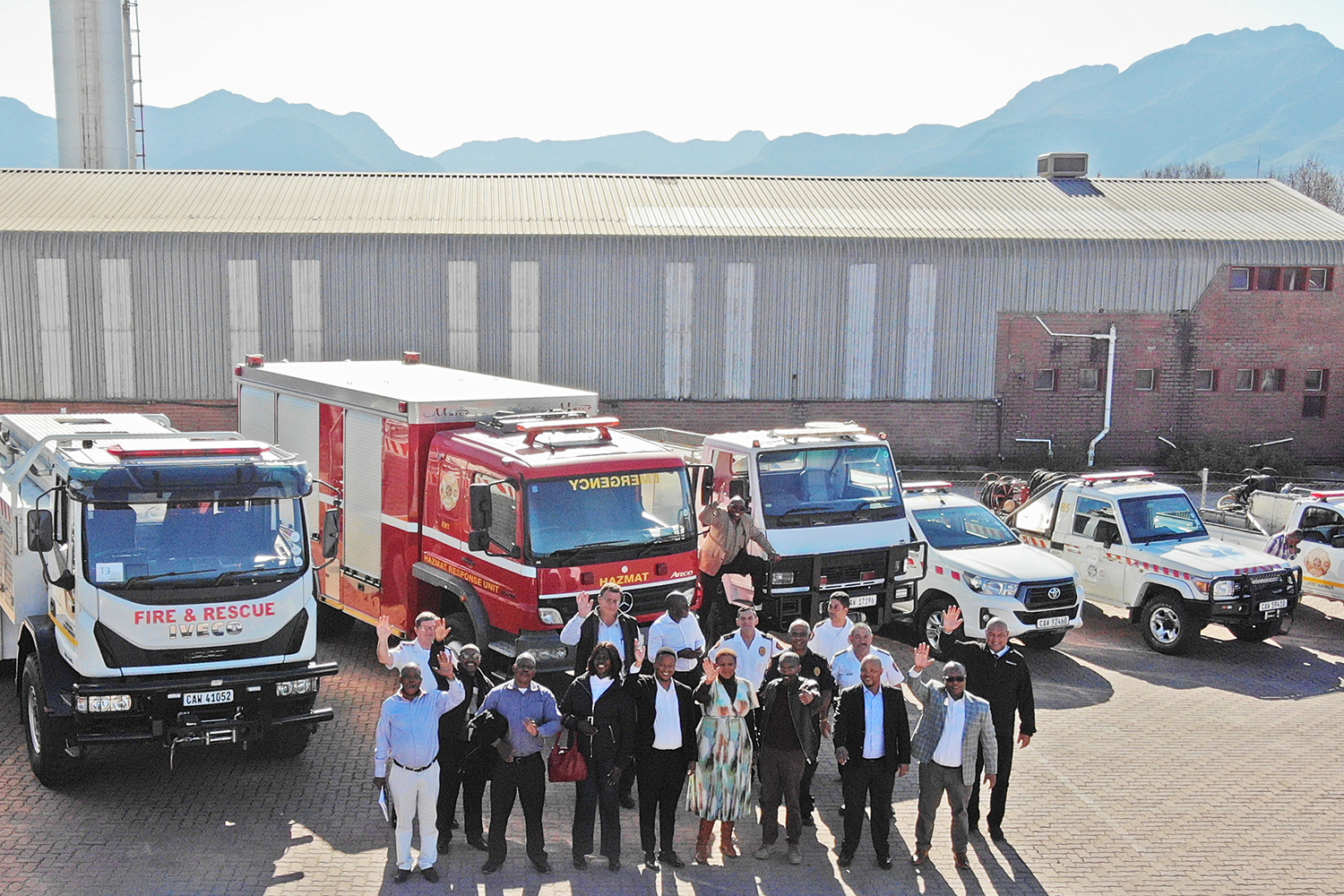 Garden Route District Municipality (GRDM) Fire and Rescue Services had a successful year of firefighting thanks to the public reporting incidents and for assistance provided by various role players. During the past financial year starting 1 July 2021 and ending 30 June 2022, no lives were lost in wildfires. A countless number of homes and shacks were protected while only ±40 structures, including shacks, were destroyed by wildfires. Shacks are included in the statistics of the GRDM because the municipality renders a local municipal firefighting function for Kannaland.

It is because of the world-class firefighting response by the GRDM and the state-of-the-art Disaster Management Centre of the District, that Bojanala Platinum District Municipality (BPDM) visited the region to learn from the best. The BPDM was here on a mission to benchmark its fire services and meet global standards while safeguarding its communities.

During her opening remarks upon arrival at the GRDM Head Office, Cllr Matlakala Nondzaba, Executive Mayor of BPDM said: “We have chosen the GRDM because the district has one of the best firefighting units in the country”.

“It can never be too late to learn from your peers who are excelling. Our visit here also comes at the right time as we enter a new financial year. We might have to relook our priorities going forward,” said Mayor Nondzaba. Executive Mayor, Ald. Memory Booysen responded with how the region has been hit by several disasters over the past ten (10) years. “This has made us very resilient and experts in coordinating regional responses to emergencies, however, we can improve like any other municipality,” said Booysen.

Booysen also took a moment to thank BPDM and the province it represents for them and others for extending lending a helping hand during the Knysna fires.

BPDM visited the GRDM Disaster Management Centre and the main firebase of GRDM which is situated at 17 Pioneer Road in Pacaltsdorp Industria, George. During their visit to the firebase, they did a walk-through of the property, learnt more about all the firefighting vehicles of the district and were shown how the GRDM’s thermal drone operates. At the Disaster Management Centre, they also had the opportunity to better understand the GRDM’s response to emergencies.

The session was closed by both municipalities agreeing to formulate a Memorandum Of Understanding (MOU). GRDM Municipal Manager, Monde Stratu, made it clear that the MOU should have clear deliverables to ensure a meaningful outcome for all future engagements between both institutions. Some of the issues touched on during MOU discussions included policy matters, budget planning for disaster management and fire services, specifications for equipment, and strategic approaches to improving workforce morale.

OVERVIEW OF FIREFIGHTING OPERATIONS OVER THE PAST YEAR

In assessing the 2021/2022 financial year, the GRDM fought over 90 wildfires, be it by foot or with the support of aerial firefighting. This means that on average, a wildfire occurs every 4th day of a 365-day period. With the Garden Route district area being 2 333 100 hectares in size, including residential areas, only 12 669 hectares were burned. This calculates to 0,54% of the region impacted by wildfires over the past 12 months.

On top of the rapid response of firefighters, the GRDM held 36 information sessions with schools and communities, three (3) per month throughout the seven (7) municipal areas. These sessions were facilitated by 40 firefighters of the GRDM who report to firefighting bases in George, Riversdale and Ladismith.

The information sessions generally include topics such as:

Another contributing factor to the success of firefighting efforts is resources. The GRDM Fire and Rescue Services Unit has the following transport assets: five (5) tankers, 6 firefighting bakkies, a command vehicle, hazardous material fire truck and a quadbike.

If the public comes across any wildfire, please make contact with the GRDM Emergency Call Centre on 044 805 5071. The call centre is operational 24 hours a day, 7 days a week and each day of the year.

Feature image: GRDM and BPDM representatives at the main firebase of the District.