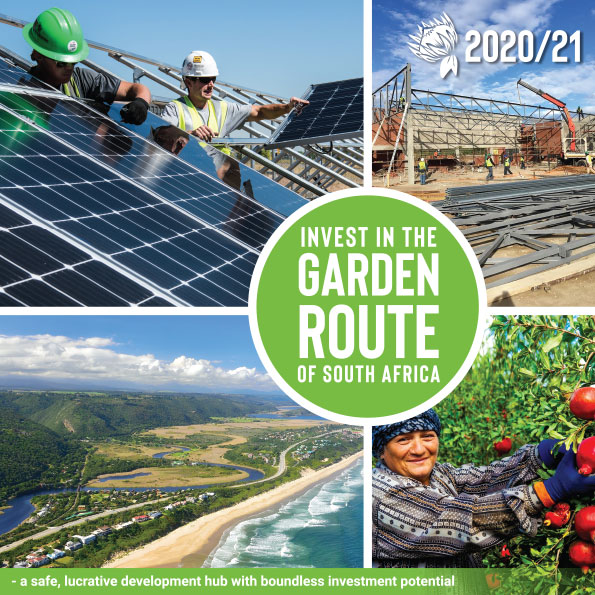 Media Release: Invest in our region – Message by Mayor Booysen and a background of the Garden Route

“The result is that more and more local businesses are now geared and ready for South African, African and international investments. The GRDM Planning and Economic Development Department encourages the public, private and civil society sectors to establish partnerships and collaboratively find solutions to common economic challenges,” said Booysen.

According to Booysen, the GRDM is approaching growth and development in a holistic nature looking at all sectors of the economy and how they are interlinked to achieve socio-economic growth. In doing this, the GRDM is looking at achieving the following:

A background of the Garden Route District

The GRDM is one of five District Municipalities (DMs) in the Western Cape Province of South Africa and the second largest economy outside of the Cape Metro. The Garden Route district (GRD) covers an area of 23 331 km² in the south-eastern part of the Western Cape, covering the regions known as the Garden Route and the Little Karoo. The N2 is a valuable transport route for goods and tourists alike and connects the GRD to the Overberg District and the Cape Metro area in the west and the Eastern Cape Province to the east, while the N12 and the R62 links the GRD with inland areas to the north.

The GRD is the Western Cape’s largest and most significant rural district. The area covers one of the country’s best-known scenic tourism areas and boasts a relatively broad-based, steadily expanding regional economy. Agriculture, tourism, wholesale and retail trade, business and financial services, construction and manufacturing are key sectors of the regional economy, in terms of value addition, The largest sectors of the GRD economy are finance, insurance, real estate and business services, followed by wholesale and retail, and manufacturing. Combined, these three sectors contributed 60, 07 per cent to the total Gross Value Added (GVA) generated by the GRD economy in 2015, an increase from 57,78 per cent in 2001. The increase in the GVA is attributed to a sharp increase of 104, 2 per cent in the contribution of finance, insurance, real estate and business services to the GVA. Over the same period, the contribution of the manufacturing sector to GVA decreased from 16, 19 per cent to 13, 96 per cent. Wholesale and retail trade contribution to the GVA of the GRD economy remain relatively stable over the period, hovering between 17 per cent and 18 per cent from 2001 to 2015.

The economic growth and development of the GRD depends on monopolising on its competitive advantages. The GRD has a wide range of competitive advantages namely the coastal line, with opportunities of ocean economy and coastal tourism; large forestry; arable land for agriculture and farming, and effective natural resources.

The GRDM is pursuing projects that include the establishment of a development agency, bulk infrastructure provision, products value chain development, renewable energy, enterprise development, integrated waste management and other projects as identified within the GRGDS. These projects and programmes will enable the GRDM to fulfil its constitutional mandate and also address the UN-SDGs, but above all address the three critical issues of poverty, unemployment and economic growth.

The district is well-known for its tourist’s attractions and natural beauty. Pristine beaches (many with ‘Blue Flag’ status) and warm waters dissolve inland into picturesque lagoons and lakes, tropical forests, rolling hills and, eventually, the Outeniqua and Tsitsikamma mountain ranges. The GRD hosts two of the three biodiversity hotspots that have been identified in South Africa. These are the Cape Floristic region (CFR) and the Succulent Karoo (SK) region.

The Garden Route is ideally located in terms of its competitive advantages of a diverse economy expanding towards a technologically apt and industrialised district, attracting investors and industries because of its location, existing infrastructure, good governance and growth potential.

Are you interested in investing in any of the investment opportunities offered by Local Government in the Garden Route District? Contact the Manager: District Economic Development and Tourism, Ms Melanie Wilson, melanie@gardenroute.gov.za